The Jaipur BookMark (JBM), which began as a shorter sister event of the ZEE Jaipur Literature Festival in 2014, has grown into a full-fledged festival strand this year.JBM opened today at Hotel Diggi Palace’s historic Durbar Hall.

The inaugural session was attended by luminaries, business people and lovers of literature from across the writing and publishing industry and around the world.

Founding Director of the ZEE Jaipur Literature Festival Namita Gokhale expressed how Jaipur BookMark “celebrates the people and institutions at the core of the publishing and knowledge industries.” On one of the key focuses of JBM this year, translation, she described it as an art that, ‘transports words and meaning across the wharf of culture and history.’ Managing Director of Teamwork Arts, Sanjoy Roy, elucidated this vision further, stating that ‘Translation is a prime focus of everything we do at JLF’, adding, ‘the incredible diversity of Indian languages is where our cultural wealth lies and remains undiscovered’.
Her Excellency Harinder Sidhu, the Australian High Commissioner to India, attended the launch of the Global Translation Rights Catalogue 2017, a collection of 46 titles in six languages from Northeast India and Nepal. Her Excellency welcomed the audience in a series of languages, including Hindi, Tamil, Hebrew, and Punjabi before describing how as a diplomat, her job is to bring people together and that, ‘nothing brings people together like reading’, since it helps us understand a different culture and way of life. 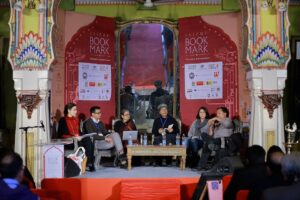 The inaugural session concluded with a keynote address delivered by noted scholar, author, and publisher Roberto Calasso. Although he described his experiences and learnings from working with the famous Italian publishing firm Adelphi Edizioni since its founding in 1962,Calasso was characteristically humble about his own achievements, including his critically-praised 2015 book, The Art of the Publisher, stating that he had written ‘a few works on a very large subject’. Speaking of his presence in Jaipur, Calasso expressed that he was ‘very happy to be back again’, and described himself as ‘a big fan of the festival’.
In Celebrating Booksellers: Curating Reading Lists Anuj Bahri, owner of the famous Bahrisons bookstore told the audience, ‘If booksellers cannot connect with the reader, the whole industry cannot survive,’ Bahri argued for the importance of brick-and-mortar bookstores in our times, stating that there is a ‘real art in being a bookseller,’ that enables them to connect to the reader in a way that publishing houses and online stores cannot.
One of the biggest obstacles to the survival of bookstores – the mammoth online bookselling industry – was a frequent talking point. The session ended with a moving entreaty by the panelists to support local bookstores. There is no doubt that this will be a long and difficult journey, but, as Rick Simonson, chief bookseller at the Elliot Bay Book Company, said to applause, we need to ‘fight back to save these spaces.’
Digital Content: Binaries of Empowerment became a fascinating discussion about the rise of digital media, and how it simultaneously empowers and excludes marginalised voices in the modern world.
All content in today’s world is digitally mediated, observed Vikram Chandra, author of Red Earth and Pouring Rain. Publishers and authors must therefore create and distribute content via diverse e-formats as well as traditional media. Sudha Gopalakrishnan, Executive Director of Sahapedia, talked about the incorporation of multimedia into encyclopaedic resources, which means that different kinds of people can now access knowledge, not just experts. Osama Manzar, founder of Digital Empowerment Foundation added that different kinds of content are also now available to a larger audience – literary, oral, aural, visual: ‘literacy has become less of a barrier,’ since everyone can be a publisher or performer. He cited the example of Justin Bieber, a star performer who started out with home videos published on the internet.
‘None of this has actually changed the structure of commercial power,’ argued Chandra. Linguistic disparities have not been bridged: English still gets a disproportionate amount of attention. The educated, economically privileged still have more presence. In places without digital infrastructure, the marginalised are further excluded as the institutions fail to keep up with the march of technology. AsChandra said, ‘Big capitalism still wins 99% of the time.’ but remarked, commercial power may still be concentrated in the hands of a few, but the digital medium can lead to empowerment for many.
A delegation of literary festival directors, publishers and representatives from the Australia Council for the Arts shed light on the literary landscape of Australia. ‘Over 87% Australians read a book a week’, Chief Executive of Sydney Writers’ Festival Wendy Wareopened the discussion with this staggering fact from recent research. Australian readers are no strangers to Indian literature either. Laura Kroetsch, Director of the Adelaide Writers’ Week, said that readers constantly look for something new and India, being a country that widely attracts Australian backpackers, offers her a ‘great opportunity to bring Indian writers here and provide a rich experience’ to local readers. Literature festivals go a long way in providing such encouragement to emerging writers. By offering a platform for authors to build a relationship with their readers, literature festivals are assuming an ‘increasingly important role in the cultural fabric of a society’, evident from their rising number as well as that of their attendees, director of Byron Bay Writers Festival Edwina Johnsonsaid.
A number of other topics were addressed from the evolution of visual storytelling in India to children’s literature and a look at the algorithms of the Indian literature market.